The adventure started on 18th May 2013 and ended on 24th May 2013. It was exciting, amazing and a memory worth remembering and writing.

The adventure started around 9pm, when I left my house with 100% battery. My 3G was switched on for the whole ride to Paya Lebar MRT to keep in contact with Twitter and our What’sapp group, Lamps. So, the group I was meeting with are Elle, Emil and Sylvia. We were supposed to be meeting at the Airport Terminal 3 but we decided to meet at Paya Lebar MRT and then continue the journey together. I was the earliest, hah, but at least music and 3G accompanied me till Emil arrived.

Emil hahaha well, this is the only picture with his face. Shall take one with him the next time I see him, I guess haha. He’s also the one whose phone battery was decreasing at a similar speed as mine.

So we started off chatting, while waiting for Elle to reach, with cameras, what we brought lol and other random crap, i guess. And then Elle arrived!

Elle, the one who thought I wasn’t Singaporean due to my ‘accent’.

(not the first time hearing it, tbh. There were people saying that I look like I’m from China, Thailand, Japan, Vietnam, etc OTL I’m pure Singaporean, lived here since I was born! hahaha but I’m glad that I dont look/sound like one :3 And another one thought I was from Australia, I’ll explain later.)

Okay, back to meeting people haha. So we chatted too and stuff until Sylvia finally arrived! 😀 Glad that we managed to hit off quite well 😀 Still talking and stuff since then. YAY!

Sylvia, said I have this American accent haha (it was you right? lol I can’t rmb ><)

We went to Popeye’s to get some ‘dinner’. All I had was just Ice Milo though. We were laughing about how people need to squeeze this bottle thingy for sauce and oh god, it was HILARIOUS. And then it was Sylvia’s turn to squeeze them. XDXD It reminded me of milking..hahaha oh wells. We then decided to just head upstairs to the arrivals, sit there and wait till midnight. Charged our phones there, played with our cameras, made boards but it wasn’t put to use since Ryan and Andrew didnt arrive on that day…

So we waited till about 1am to see if Chester was on that plane. Then we realized that it was on the next flight… So we waited till 2.30+am when the flight landed. And the belt was Belt 42 ❤ THE MAGICAL BELT XD Managed to see Mama See and CHESTER around 3.30am. He was like “How did you find out about my flight?!” XD And he said “I love you” to me first. asdfghjkl 8DDD *faints* And hugged me first, touched me first hahaha. He saw the cover of my autograph book and said “Oh! But we touched!” I literally died and just said “YEAH!” 8D

And then we took a group picture 😀

We stayed till about 6am for the MRT to start operating and I reached Yio Chu Kang about 7am. Was walking home and saw this beautiful view ❤

That’s the MRT, btw. hahaha Look at the beautiful, blue, cloudy sky and the sun shinning through the trees. ❤

So I didn’t go out on Sunday (Cause I reached home on a Sunday! XD And I slept on my comfy bed around 7.50am.. Then by the time I woke up, it was already 2+pm! hahaha oops) nor on Monday due to sch and preparation for Tuesday!

Reached Ritz Carlton around 1pm and managed to make a few friends there instantly. Cool.

Saw Andrew and Ryan and both went inside the room, where we can’t enter.. But afterwards, Andrew comes out and thar! Picture, autograph and SUNDAY MORNING RAIN IS FALLIN~

Andrew left and came back with Chester down the stairs! 😀

During Nicko’s kitchen/ Thai guy, lol, we came out to try our luck :3 And when Wes appeared, he wanted to go in to the room but instead, he came out and said “I’ll just hangout here for a while with them” Ohh Wes~ ❤ He’s so tall!! I had to tilt my phone up in order to get his hair hahaha

And that, my Tuesday ended, around 12am OTL with school the next day! But it was just listening compre so whatevs.

My adventure for Thursday started off with going to MBS around 4pm. Yes, it was that late. And I regretted it.. But it was alright. hahaha cause I won the tics to Boyce Avenue’s showcase! 😀 Oh god, it was amaze-balls!

Boyce Avenue ❤ Could only take a group shot as they were heading up to their rooms. ><

The one on the far left is Carissa~ Once again, we became friends instantly! Yay again for new friends 8D 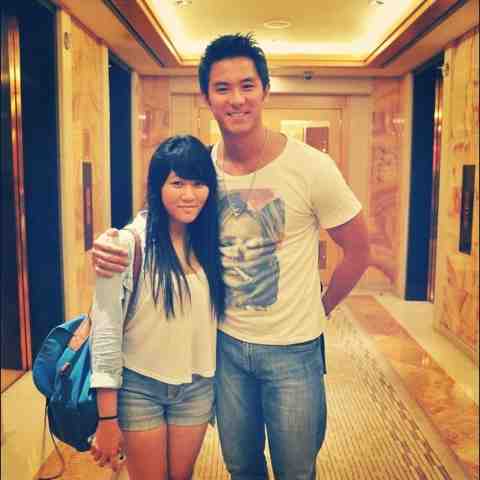 Went back to mbs for a while to try our luck and we saw Pewds! 😀

So, Friday. Hahaha Best day ever! 😀 Reached MBS around 1 and ard 1.30, guess who I saw? YES. RYAN HIGA. And Andrew but I was satisfied with Andrew already so FINALLY RYAN. I TOTALLY LESS THAN THREE YOU RYAN ❤

Thank you for stopping just for me to take this photo 😀

Stalking with this group of people, well, sorta haha with Sarah and her friend which I dont have the pic here OTL Sorry!!

So..what happened was that we were about to give up and head over to Gluttons Bay for Wes until we heard screams and we ran back to the star gazing pit area and BAM. RYAN, WES (dude, why you still here lol) and DAVID (haha you looked so cute when you were looking down at us XD). We stayed a bit longer, since Wes was still there lol. Long story cut short, I brofist Wes, Ryan saw me too, won tics to the Singapore Social Concert with Carly Rae Jepson, Blush, Psy and Cee Lo Green performing (we missed Blush’s performance. Oops)! We ran and cabbed to Gluttons Bay for Wes, took picture with him and ran back to Gardens By The Bay for the concert, and for Ryan, Andrew and Chester ❤

Wes! haha and Jacelyn at the bottom… oh wells lol. This was near the pit 8D Hahaha where are you looking Wes!

And then at Gluttons Bay~~ ❤ WE TOUCHED. And he’s 13 years older LOL

So at the concert…

So we made friends with this group of French (and one Singaporean) people! 😀 The guy, Chab, on the most left lent me his VIP pass and I went in!

❤ And at first, I didnt know that guy beside me was Bing Chen hahaha oops. You can see my hand trying to touch Ryan :33

Then they came out hahah oh god my hair still… But hi again Andrew! 😀

Well, these are the people that I managed to take a picture with but..I don’t really know them. Oops.

Blush! Their songs are actually not bad..

So on Sat, I stayed at home.. And on Sun, wanted to send some peeps away but by the time I reached there, THEY ALL LEFT QAQ but nvm, I’ll wait for you guys to come back ❤

Okay, so that was my amazing week before the week of Chinese lessons to prepare for Chinese O lvls ><

Hope you enjoyed and fangirl-ed with me 8DD

PS: ASK FOR PERMISSION IF YOU WANT TO USE IMAGES. OR I WILL REPORT FOR COPYRIGHT INFRINGEMENT.

Do email for any questions: shiayn_@hotmail.com

There was an error retrieving images from Instagram. An attempt will be remade in a few minutes.